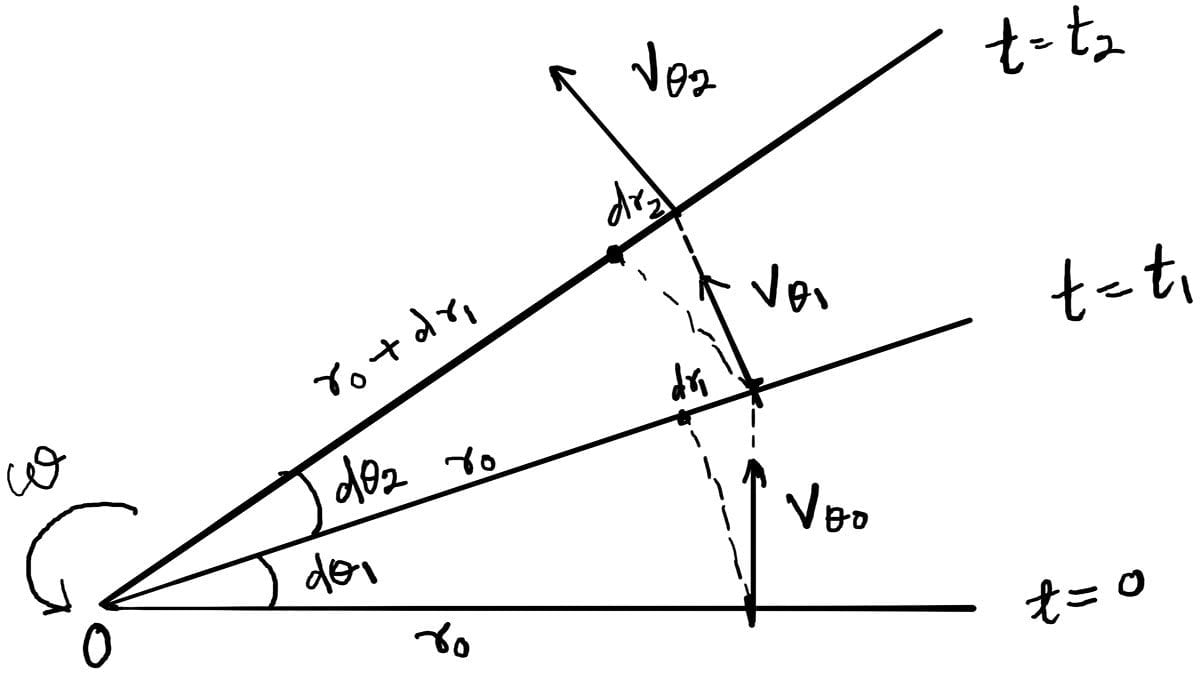 This post is categorized as ‘Lecture’ because, even if it is based on a single problem, some important concepts of Physics are illustrated in this.

A bead of mass $m$ is embedded to a horizontal long massless thin wire such that the bead is free to move along the wire. The wire is made to rotate around a vertical axis passing through one end $O$ with constant angular velocity $\omega$ at time $t = 0$. The bead at this instant is at a distance $r_0$ from $O$. Find the expression for the angular momentum $L$ of the bead around $O$ as a function of time.

If you prefer watching over reading, you can also watch the video lecture below.

The quick and easy formula that comes to the mind when asked to find the angular momentum of a particle of mass $m$ with angular velocity $\omega$ at the position $\vec{r}$ relative to the centre of rotation is $L=I\omega$ where $I$ is the moment of inertia of the particle given by $\boxed{I=mr^2}$ or simply $\boxed{L=m\omega r^2}$. Ideally, we should not bother about the radial velocity of the bead, if any, since the radial velocity vector will always pass through $O$ and make the angular momentum null ($\vec{L}=\vec{r}\times\vec{p_r}=0$, where $\vec{p_r}$ is the linear radial momentum ($=m\vec{v_r}$)). But in the problem we have, $r$ is not a constant but a function of time. Thus, the crux is to find $r\equiv r(t)$.

(a) from the ground frame

From the ground frame, once the wire starts to rotate with the angular velocity $\omega$, ignoring gravity, the bead will experience only one force at any instant. This force is the contact force normal to the wire which is exerted on it by the momentary contact point on the wire. Why so? That’s because, since the bead is embedded to the wire, it cannot have a relative velocity with respect to the contact point along the normal to the wire at that point. However, the bead is free to move along the wire. This means there is no radial force on the bead from any point on the wire. Since every point at a radial position $\vec{r}$ on the wire is moving in a circle of radius $r$, the instantaneous tangential velocity of that point on the wire at an angular displacement $\theta$ with respect to the initial line, $\vec{v_{\theta}}$, is given as

This is the instantaneous tangential velocity of the bead at any given radial position at any given instant. Now let’s try to understand, what generates the radial motion of the bead and form a clearer picture.

At $t=0$, the bead starts moving with the same velocity $\vec{v_{\theta_0}}$ as that of the point of contact. When the wire moves through a rotation of $d\theta_1$, the point of contact at $r_0$ moves in a circular arc as it accelerates due to the centripetal force along the wire. The bead, not getting any force along the radial direction, keeps moving with $\vec{v_{\theta_0}}$. When we look at the bead again at $t=t_1$, we see that the contact point of the bead on the wire has now has moved a distance $dr_1$ radially inward. One perspective is that it’s not the bead that has moved radially out, but the previous contact point has moved radially in and a new contact point has now been established at $r=r_0+dr_1$. Again, at $t=t_1$. This new contact point now forces the bead to move with a tangential velocity $\vec{v_{\theta_1}}$. Through a subsequent rotation of $d\theta_2=\omega(t_2-t_1)$, this contact point recedes, once again, by $dr_2$. By now, the bead is in contact with another point on the wire at $r=r_0+dr_1+dr_2$. This goes on and on till the bead falls out of the wire at the free end. Since we are concerned only as long as the bead stays on the wire, let’s not worry about the bead falling out. At the end of this section, we shall also talk about the other perspective that is more rigorous and complex but explains the real Physics from the ground frame.

Now that we have got a perspective in which the wire that accelerates radially inward and not that the bead accelerates radially outward, we can frame the equation of motion. But we are solving the motion of the bead and not of the instantaneous point of contact. Therefore we have to frame our equation using the apparent acceleration of the bead relative to its momentary point of contact. This relative acceleration $\vec{a_r}$ is radially outward.

Any differential equation of the form $r^{”}+ar^{‘}+br=0$ has a characteristic equation,

Let the roots of the characteristic equation be $\lambda_1$ and $\lambda_2$.

Then, the general solution of the differential equation is given as:

where $C_1$ and $C_2$ are arbitrary constants whose values must be found using boundary conditions.

Thus the general solution in our case is:

Also at $t=0$, the points on the wire have no radial velocity since the centripetal acceleration hasn’t had any time to generate any velocity. Thus,

Now we can get to where we started from and simply write angular momentum as a function of time.

The better but more complex perspective is to consider that starting from the beginning of motion, the bead keeps acquiring a resultant velocity that is not completely tangential. Look at diagram 2 again and try to understand that when the bead gets to the radial direction at $t=t_2$, it still retains a part each from $\vec{v_{\theta_0}}$ and $\vec{v_{\theta_1}}$. And the vector sum of the parts of $\vec{v_{\theta_0}}$ and $\vec{v_{\theta_1}}$ lies at an angle to the normal contact force at this instant. It also has a radial component. So, basically, it is the varying normal contact force that feeds the radially outward velocity of the bead. The question doesn’t contain any information about the contact force, hence we cannot solve the problem directly using Newton’s second law of motion. However, we still can solve the problem using the work-energy principle, since all the forces in this system are conservative. But this requires a different method, called the Lagrangian Mechanics which is basically an advanced reformulation of the Newtonian Mechanics. We shall discuss this in the end.

Now that we understand the problem and have solved it from the ground frame, the other two methods, (b) and (c) should come easy.

(b) from the rotating frame

Finally, let’s bring in the tool we call Lagrangian to solve the problem again from the ground frame. Applying Lagrangian to this particular problem is neither necessary nor makes it easier to solve the problem. But it demonstrates the validity of the concept that the Lagrangian of any mechanical system contains all the necessary information about the system and by using the proper Lagrange equation we can find any information about the evolution of the system.

To denote the Lagrangian we are going to use a scripted $\mathscr{L}$ so that we don’t get confused with angular momentum. The definition of Lagrangian for any mechanical system in simple words is the difference between the kinetic energy ($T$) and the potential energy ($V$). Why this is so is something that we can understand when we discuss Lagrangian in another dedicated post about it. Till then it should suffice to say that for complicated mechanical systems, the total mechanical energy ($T+V$) comes less handy than the Lagrangian ($\mathscr{L}=T-V$).

With all the information we already know, let us write the full expression of the Lagrangian and the Lagrange equation for our problem.

Since at any point in time, the bead will have a radial velocity and a tangential velocity, we write down the kinetic energy as the sum of the two components as:

Since we are ignoring gravity and there is no other restoring force in the system, there is no potential energy. Thus $V=0$ for all time. Hence, we could write the Lagrangian for the system as:

Before we form the Lagrange equation, we need to understand the role of the wire. The wire constrains the movement of the bead along the normal direction but offers no resistance along the wire. Thus, the velocity of the bead at any time can be uniquely determined separately by both $r$ and $\theta$ (refer diagram 2). Thus there is a relation between the position variables $r$ and $\theta$ and we can express that relation as:

Such a constraint is an example of what is called “Holonomic”. Since, $\theta=\omega t$ and $r$ can be shown as a function of $\theta$, time $t$ becomes an explicit variable. This makes the system “Rheonomous“. In such a system, we can write the Lagrange equation using any of the position variables $r$ or $\theta$ to find the exact answer. Since it is easier to visualize the change of kinetic energy of the bead with the varying radial positions, we write the Lagrange equation using $r$. If you want, you can also try $\theta$ and post your solution in the comments below or in the General Physics Forum for a review.

Now, let’s write the Lagrange equation for our system.

Now, let’s solve each term on the lhs.

From $Eq^n (5)$ and $Eq^n (6)$, after cancelling $m$ from both the terms on lhs, we can write the final differential equation of motion as:

If you prefer watching over reading, you can also watch the video lecture below.

If you still have any doubts, or if you find any mistakes, please mention in the comment section below. You can also use the General Physics Forum on ThePhysicist to post your questions and rest assured, ThePhysicist is always hungry for problems to solve.

4 thoughts on “Bead embedded to a rotating wire13 min read”

Weekly Routine Maintenance is scheduled for every Sunday from 2100 Hrs to 2200 Hrs as per Indian Standard Time. The site may not be accessible during maintenance hours.